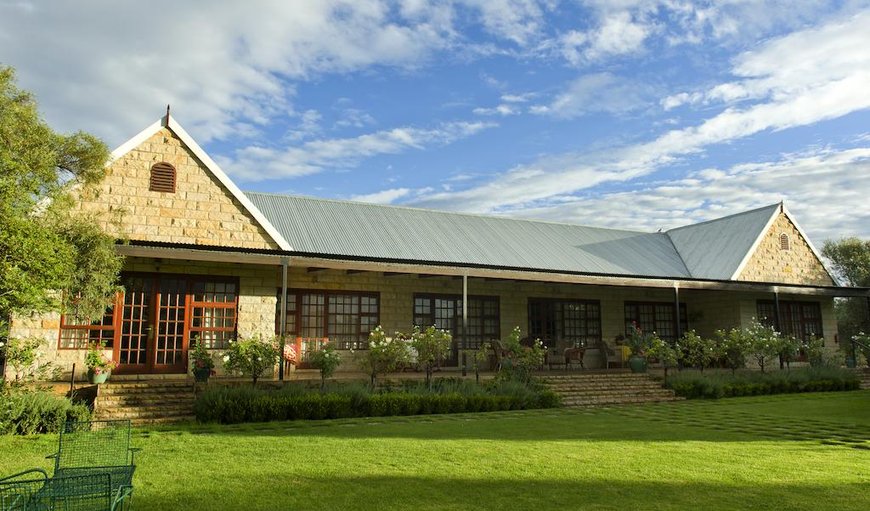 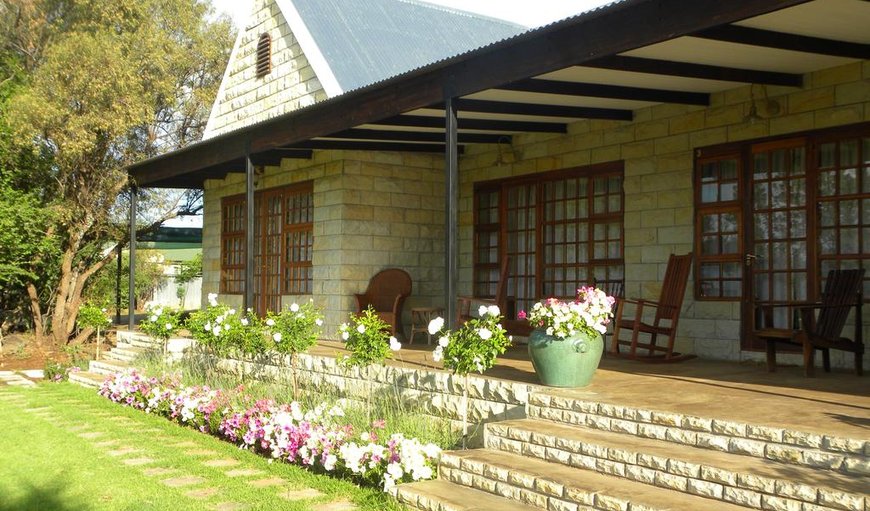 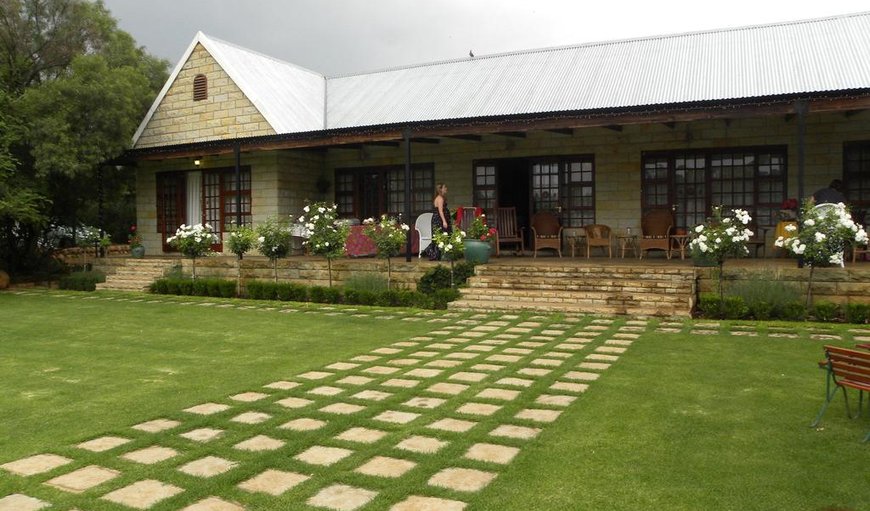 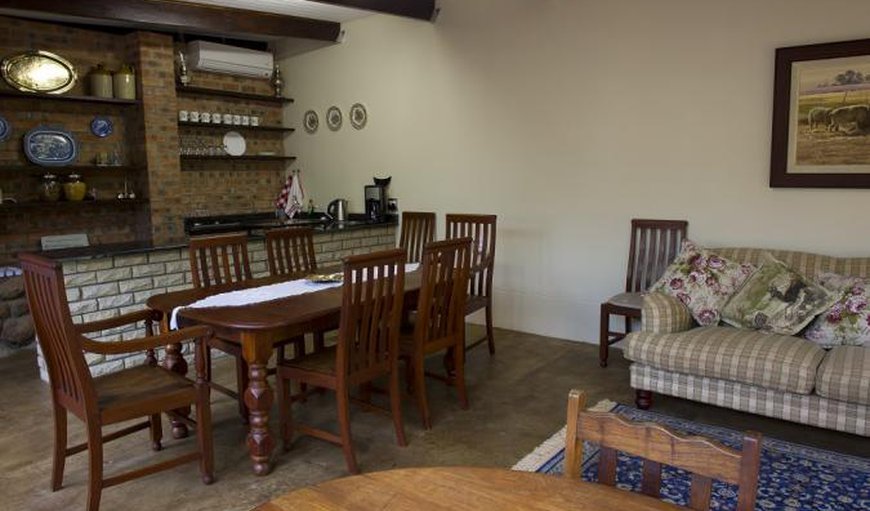 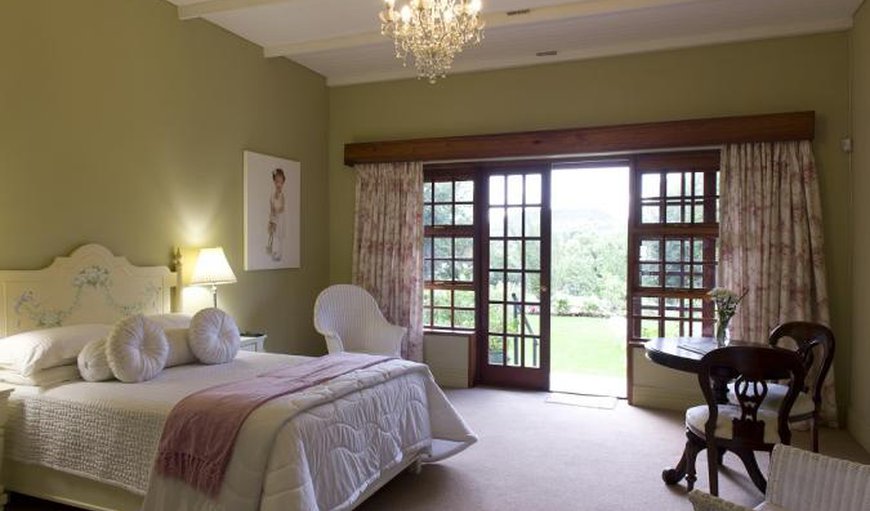 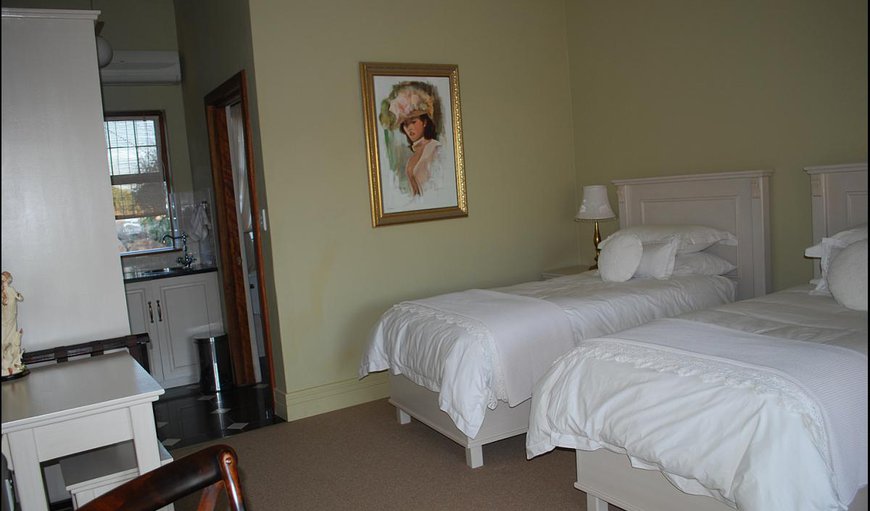 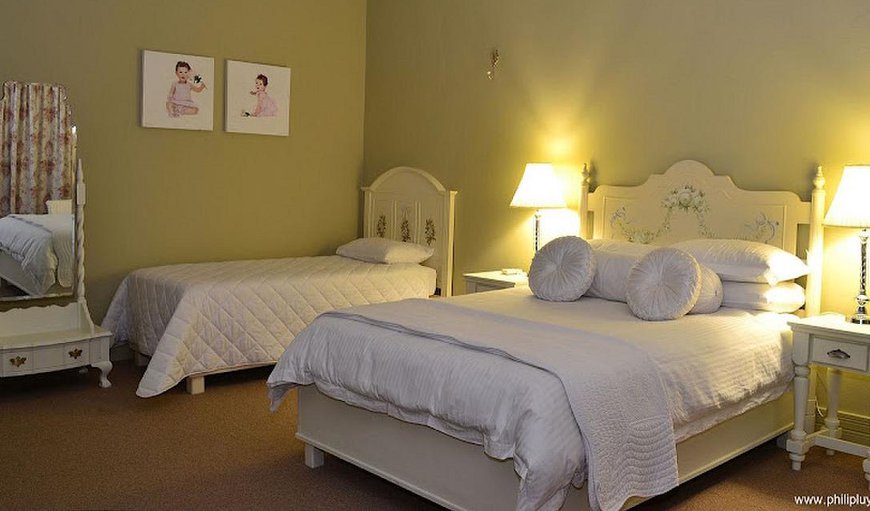 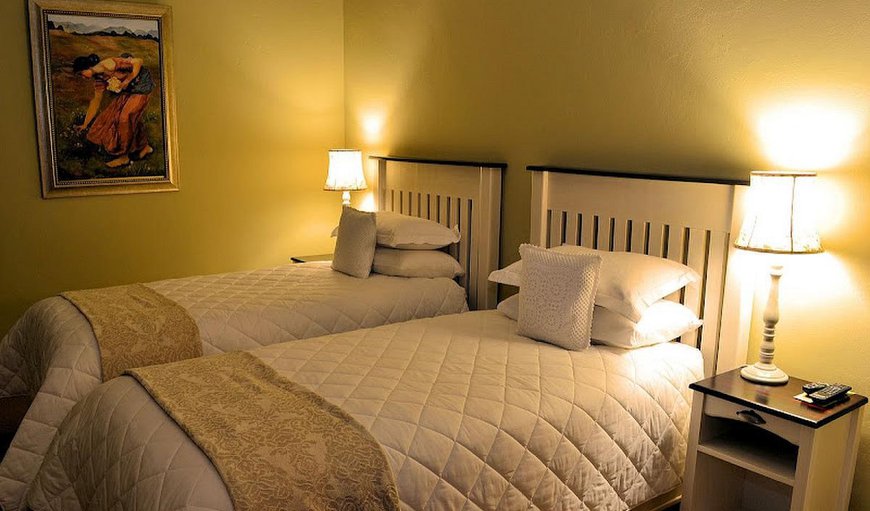 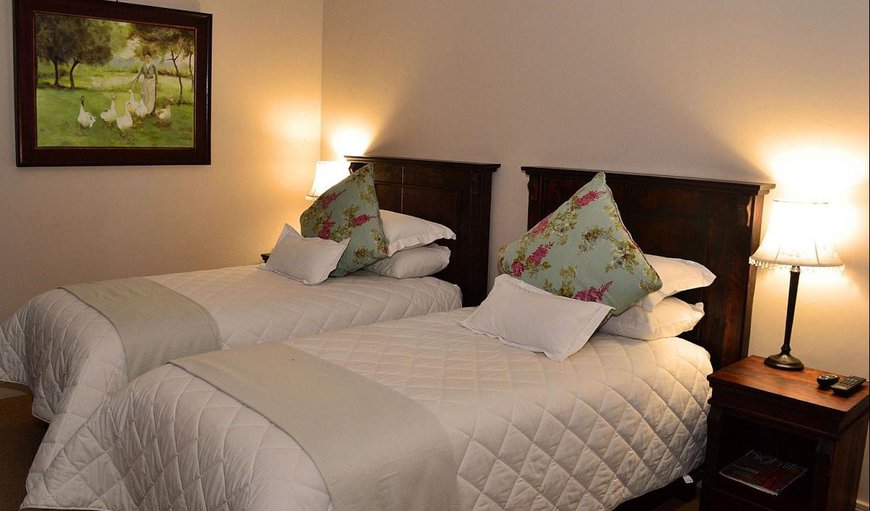 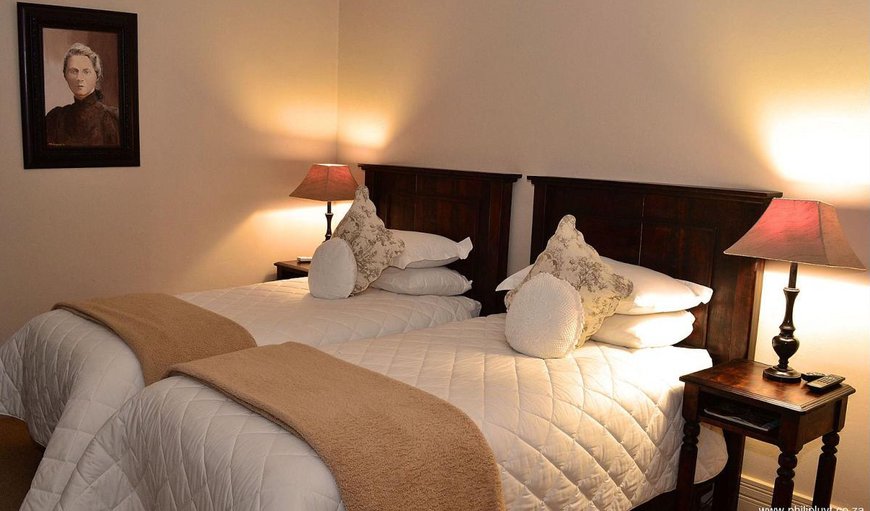 Olive Hill Guest Lodge offers six en-suite bedrooms linked by an inviting wide verandah for spending lazy late afternoons lapping up the Free State sunshine and enjoying an unencumbered view of a typical Free State rural countryside, along with friendly and welcoming dogs and chickens roosting in the wild olive branches on the lawn in the early morning!

Each bedroom is furnished with a small kitchenette, fully equipped for purposes of self catering. Breakfast is available on request. The two larger bedrooms come equipped with double beds, Victorian bath and shower, and kitchenette. For families we offer the possibility of additional bunk beds. The four smaller rooms each have two single beds in a spacious environment with lovely views.

Guests will find the newly built and well appointed bedrooms with kitchenettes and en-suite bathrooms a haven from the city nearby, yet close enough to make use of its conveniences. Olive Hill Country Lodge is designed to appeal to families but also to conference attendees and representatives looking for something out of the ordinary in the heart of the Free State that will appeal to farmers, hunters and the rural soul who prefer to enjoy the quiet of a starry Free State night.

The Guest House is also ideally equipped for a prospective bride and her bridesmaids and closest family to prepare for her wedding.

Olive Hill Country Lodge is situated only 4 km north of Bloemfontein and near to the Bloemfontein Airport. Accessibility to the N1 is a further aspect in its favour. We are happy to provide you with directions to nearby restaurants, movie theaters, tourist sites and malls.

Bloemfontein, the City of Roses, serves as something of an oasis, lying as it does plum in the middle of the Free State and indeed the country. The only major city for miles around, it is also the sixth largest city in the country, the Judicial Capital of South Africa, and it lies on the N1 between Johannesburg and Cape Town, often functioning as a stop off to break the major journey between the two cities.

Despite being situated in an area of dry grassland, Bloemfontein more than lives up to its name - spring of flowers. Thousands of rose bushes line the city; more than 4000 rose trees have been planted in the rose gardens in Kings Park, and many homes boast colourful gardens littered with flowering plants and trees. Bloemies, as the locals fondly call her it, is a city of little stress and very few residents buy into the rush, rush syndrome typical of a major city. The city centre is lined with historical buildings, including the beautiful tree-lined President Brand Street - a national monument - its pavements home to several graceful museum buildings, right in the centre of the CBD.

Naval Hill, a little nature reserve of 192 odd hectares, set right in the city, is worth a drive through. Set on a hill as it is, it not only provides a welcome respite from all things city, but also gives a bird's eye view over the city. And the extremely modern Orchid House, which lies at the western foot of Naval Hill in Hamilton Park, lays claim to the world's largest collection of orchids. There is also a fragrance garden for the blind close to Orchid House.

Meals are available if arranged in advance. English breakfast and dinner can be ordered. Covered parking.

Bloemfontein Zoo: Sanctuary is provided in the Bloemfontein Zoo in pleasant surroundings for the "Big Five" as well as several antelope species, tigers, panthers, hippos and apes. A large variety of birds is an added attraction. The most unusual inhabitant is the liger, a cross between a lion and a tiger.

National Museum Bloemfontein: Notable for its large collection of fossils, cultural historical exhibits and archaeological displays, including the Florisbad skull which was discovered in the 1930s at the Florisbad Spring some 50 km north of Bloemfontein.

The Free State Botanical Gardens are situated on the northern outskirts of Bloemfontein. The botanical garden is home to 400 species of plants, two dams, and an indigenous Karee and wild olive dominated vegetation. There are specialised gardens including the water-wise garden, the medicinal garden, the succulent garden and the bird garden. Around 124 species of bird life and 54 species of reptiles have been recorded to inhabit the garden. There is a circular hiking trail which takes you through the cultivated areas and up on to the koppies overlooking the gardens. The botanical garden will also be of interest to those who love history. The curator's house was built by Italian prisoners of World War II, the old stone walls were built by British troops during the South African war, and the prehistoric pottery relics found in the area are on show in the education centre.

Golfing fanatics can enjoy a round at Bloemfontein Golf Course or Schoemanspark Golf Course.

Oliewenhuis Art Gallery: Oliewenhuis Art Museum in Dan Pienaar is housed in a Neo-Dutch style mansion which served as residence for the Governor General of the Union of South Africa. In 1985 it was converted into an Art Museum as a satellite of the National Museum Bloemfontein. The Permanent Collection housed at Oliewenhuis is an outstanding collection of South African art, which includes a unique outdoor Sculpture Park and a working African Carousel, for which original sculptures were commissioned. Temporary exhibitions of South African artists are regularly exhibited in the Museum galleries and the unique underground Reservoir gallery. Other highlights include the Blind Alphabet, an artwork created specifically for the sight-impaired and the functional Cement and Mosaic sculptures situated in the gardens. The gardens have many shady trees that provide a wonderful space in which to picnic or you can simply enjoy tea at the little garden tea house.

We were on a pet friendly trip returning to Pretoria from East London.
The room was perfect, clean & spacious with all that you need for a night.
There were nice touches like milk, rusks, yoghurt & biscuits for the morning.

Fabulous. 4 out of 5
indrajit guha