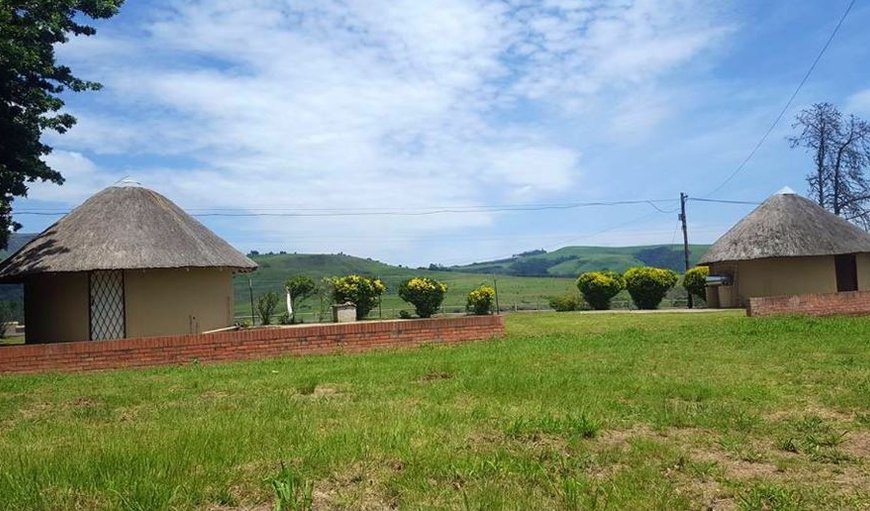 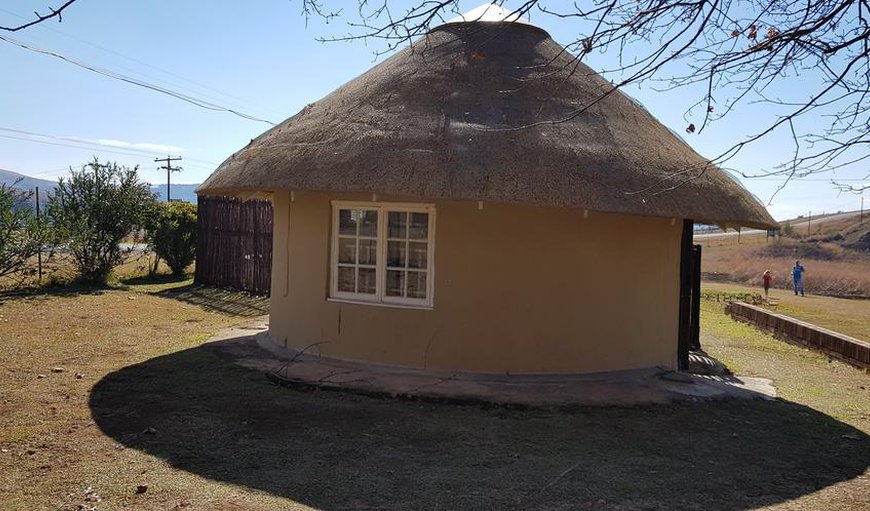 We offer two self catering rondavels, situated in the heart of Cathkin and Champagne Valley, Central Drakensberg. 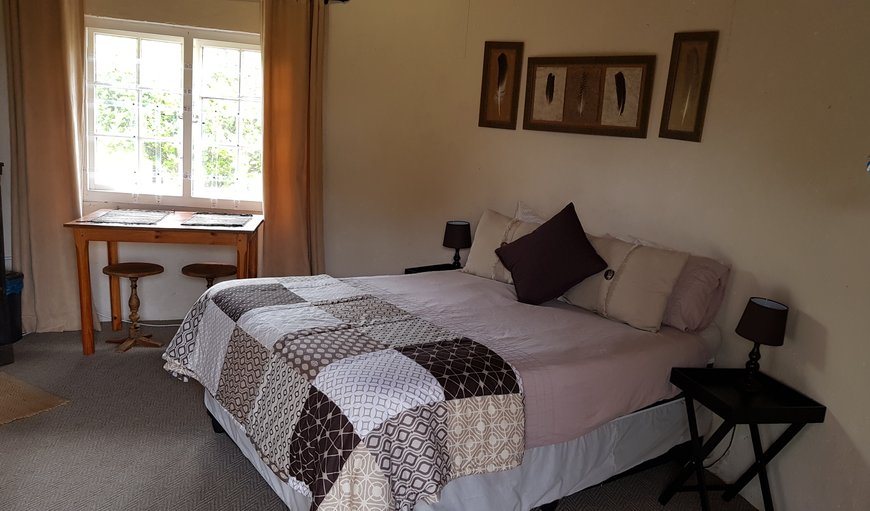 Feathers - This rondavel has a double bed with a table and two chairs. 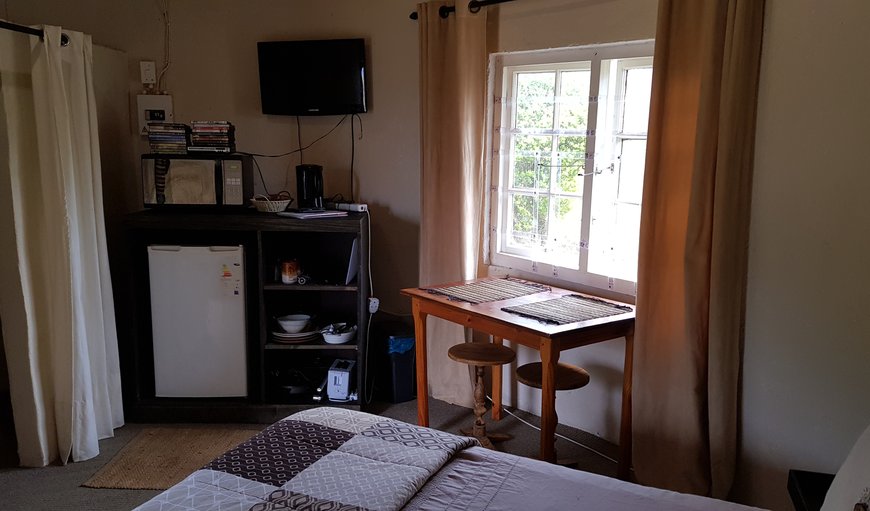 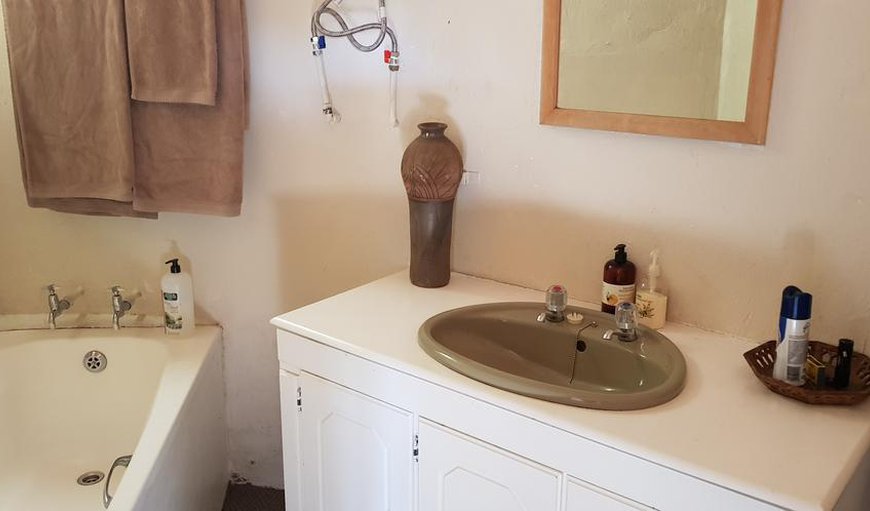 Feathers - An en suite bathroom with a bath. 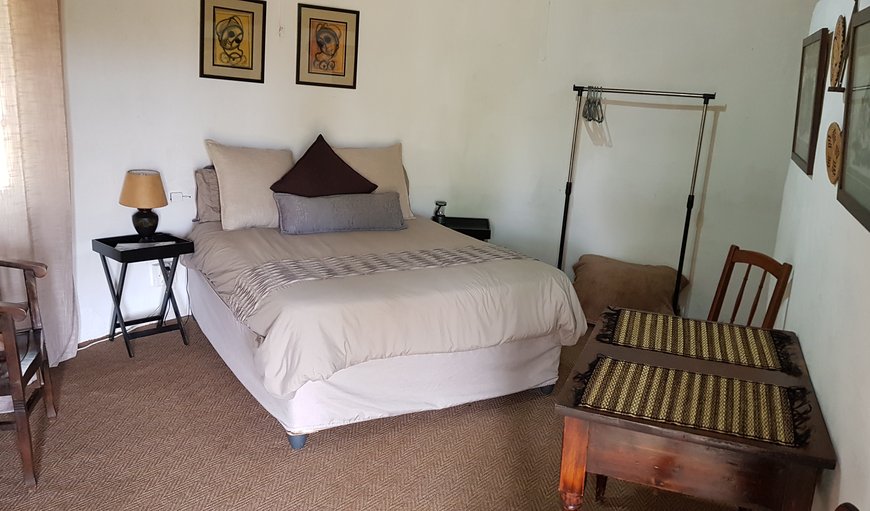 Spades - This rondavel has a double bed suitable for two guests. 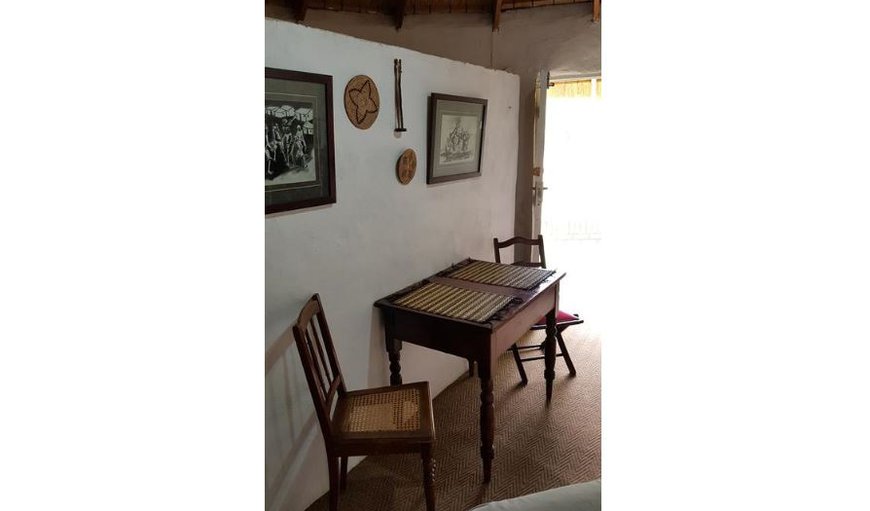 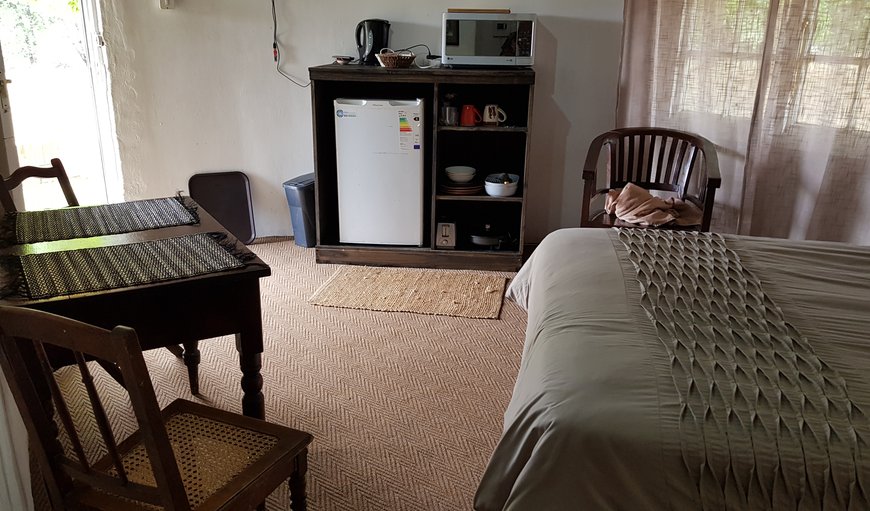 Spades - There is also a bar fridge, microwave, cutlery, crockery and tea/coffee making facilities in the rondavel. 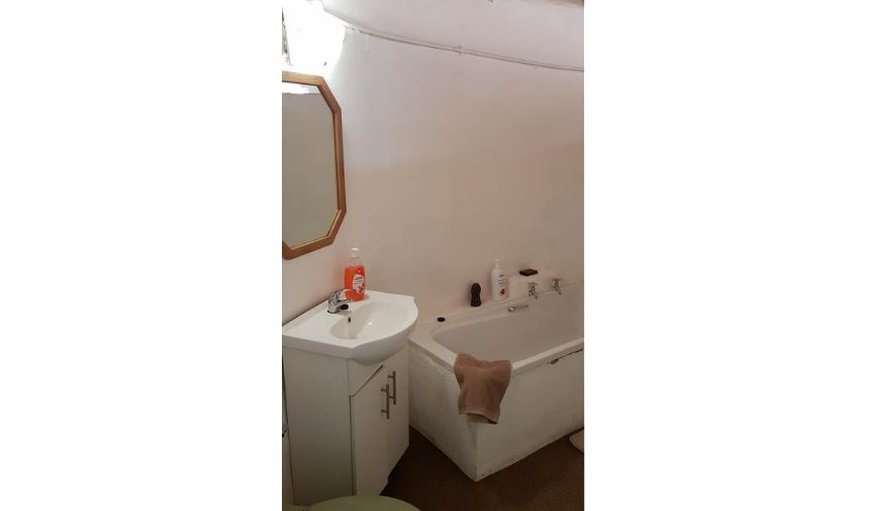 Spades - An en suite bathroom with a bath. 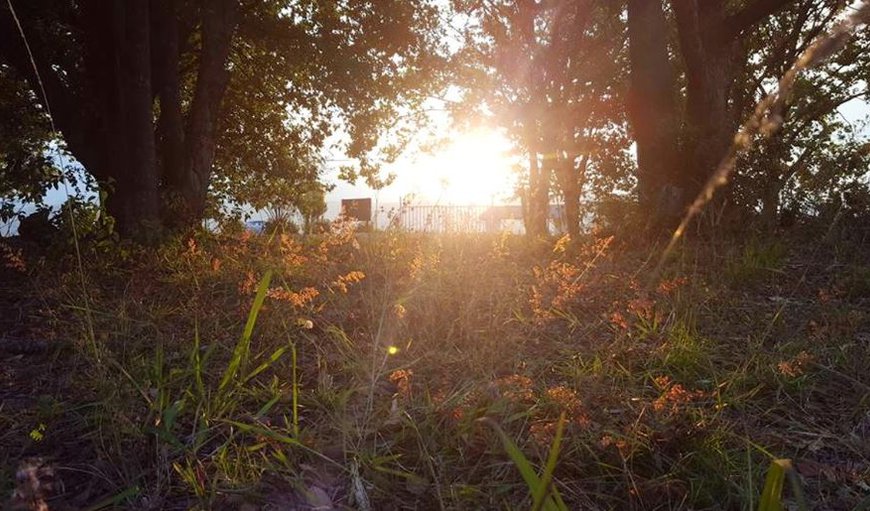 There is a garden on the property. 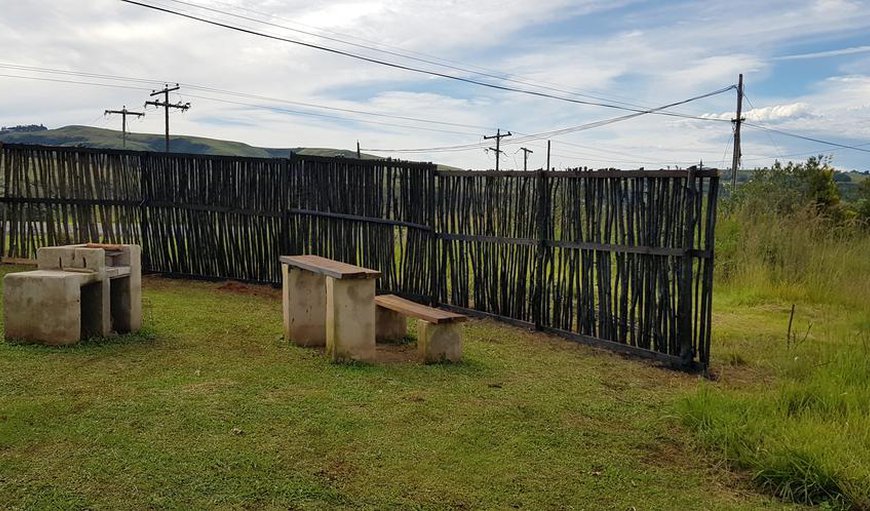 Braai facilities are available outside. 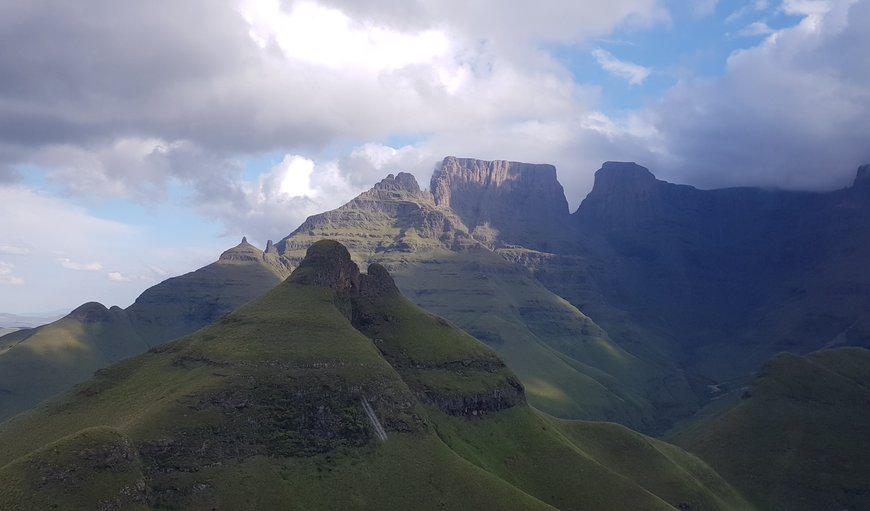 Enjoy the spectacular views of the Drakensberg Mountains. 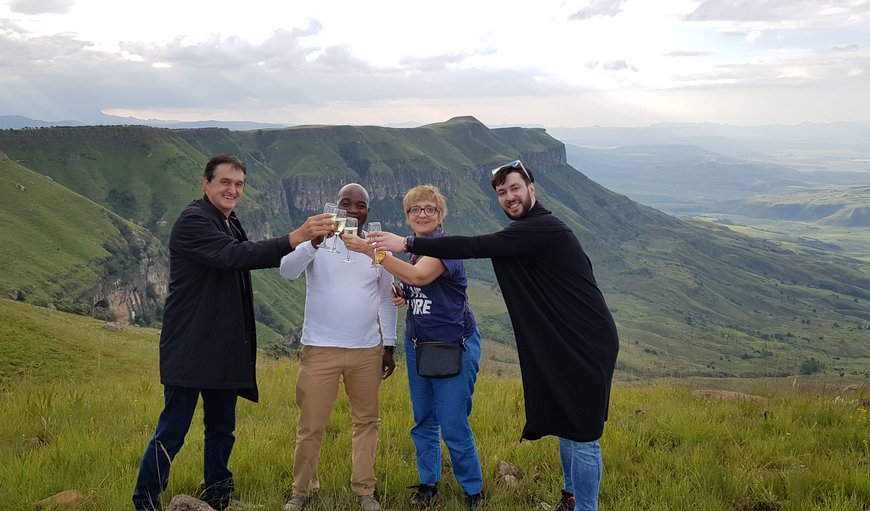 Guests enjoying a glass of champagne with the gorgeous mountain views surrounding. 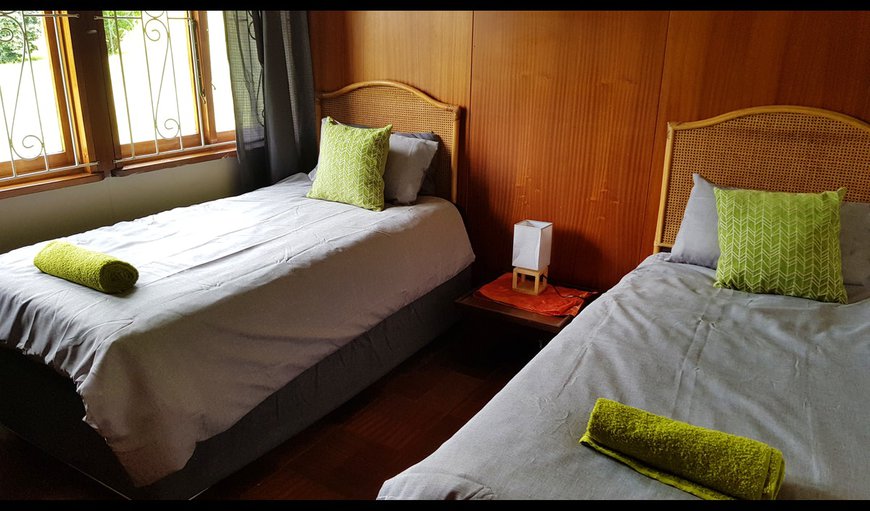 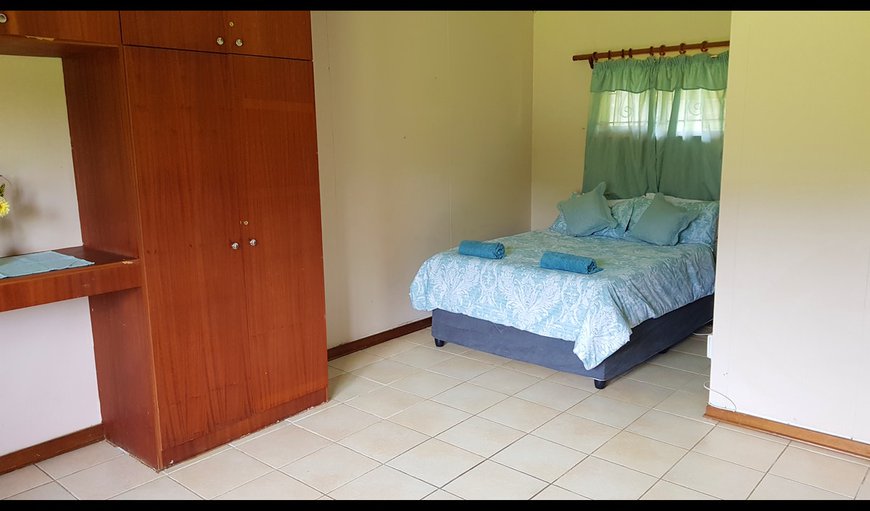 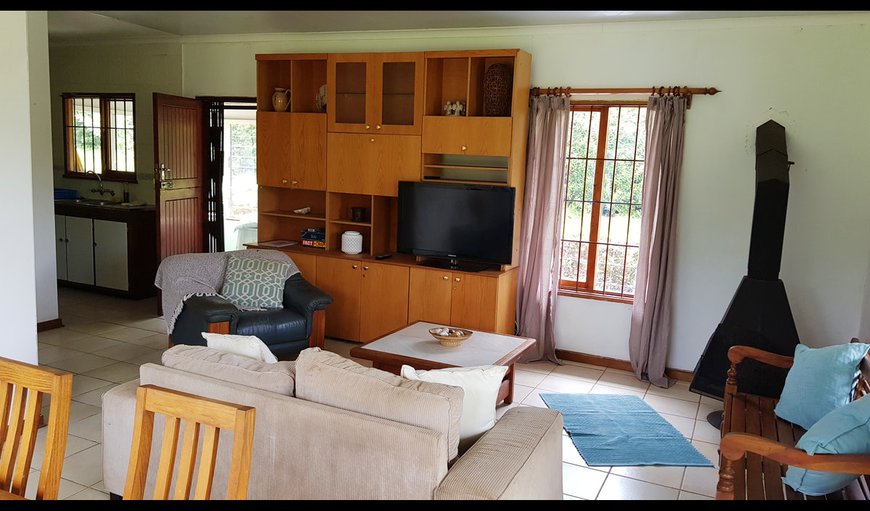 Swallowfield is located on the R600 some 32km from Winterton and opposite the Drakensberg Boys Choir and the Dragons Peaks Resort.

ADVENTURE TOURISM:
The Drakensberg is a centre for adventure activities or experiences. For example, it has the largest concentration of hiking trails in South Africa. Furthermore, hot air ballooning, white river rafting, horse riding, trail running, abseiling, zip-lining, e-biking and mountaineering are some other adventure experiences.

CULTURE:
Additionally, the Drakensberg is an important cultural centre. Firstly, it is the home of the Drakensberg Boys Choir School. Furthermore, It has a range of curio shop centres, such as Thokosiza. There is even a craft brewery. Also, a renowned wine estate, known as the Cathedral Peak Wine Estate. Besides these, there is a chocolate factory known as Chocolate Memories. Moreover, there are a variety of exceptional craft centres, which provide traditional Zulu baskets, beadwork and even woven carpets.

The ancient San or Bushman people are also celebrated in the area, with artworks replicating their cave paintings and a special display of their lives in the easily accessible Main Caves at Giant’s Castle.

WILDLIFE:
A significant portion of the Drakensberg is a World Heritage Site. The site encompasses an area of 250,000 hectares. This area received World Heritage Site status on two counts. Firstly, this was awarded due to its unique vegetation and wildlife . There are some 1,800 plant species in the Drakensberg. Of these over 350 are endemic. Furthermore, ten vertebrate species are unique to this mountain range.

There are a range birds that are seen in the Drakensberg. Firstly the Rock Kestral, the Cape Eagle, the Black Eagle, Bearded Vulture, and the Jackal Buzzard. Additionally, observe a number of buck species in this particular area. Firstly the Common Duiker, the Klipspringer the Eland, the Bushbuck, the Rhebuck, the Mountain Reedbuck and the tiny Oribi. Other wildlife that is commonly seen include the Rock Hyrax or Dassie, the Chacma Baboon. Extremely rare is the leopard.

SAN ROCK ART:
The second component upon which the World Heritage Site status of the Drakensberg was based was the existence of more than 30,000 examples of San rock art. The Drakensberg has the world’s most extensive collection of rock art. The ‘outdoor art galleries’ can be found in many caves, shelters, and sandstone bands along the length of the mountain chain. Many in protected sites, accessible only with a qualified guide.

It was almost declared a World Heritage site on a third count as it is one of the world’s best examples of an erosional mountain. Moreover, The Drakensberg is an escarpment. It borders the Mountain Kingdom of Lesotho and three South African provinces namely, parts of the Eastern Cape, KwaZulu-Natal, and Mpumalanga. It stretches for some one thousand kilometres. The largest section of more than 300 km, can be found in KwaZulu-Natal.

The second highest waterfall in the world is found in these mountains. They are known as the Thukela (thunder) Falls. These falls drop close to one kilometre. The adventurious can climb the chain ladder near Witsieshoek to experience this marvel!

ONE OF THE WORLD’S MOST IMPORTANT EXAMPLES OF AN EROSIONAL MOUNTAIN:
A volcanic plume under southern Gondwanaland caused bulging of the continental crust in the area that would later become southern Africa, some 180 million years ago, Rift valleys formed on either side of the central bulge approximately 20 million years ago. These became flooded to become the proto-Atlantic and proto-Indian oceans. The stepped and steep walls of these rift valleys formed escarpments. These surrounded the newly formed Southern African subcontinent. Southern Africa then became tectonically quiet. Earthquakes seldom occur.

A PERIOD OF EROSION:
Moreover, there has been no volcanic activity for approximately 50 million years. However, an uninterrupted period of erosion has continued to the present day. The eroded material was kilometres of marine sediment.

Moreover, massive upliftment, during the past 20 million years, especially in the East, took place in Southern Africa. As a result, most of the plateau extends above 1,000 metres. The plateau is tilted, leading to its highest point is in the east. The slope is gentle in the west and south. The elevation of the eastern escarpments is at least 2,000 metres. Furthermore, this tilt reaches its highest point of over 3,000 metres. This area is the border between Lesotho and the South African province of KwaZulu-Natal.

Additionally, the upliftment of the central plateau over the past 20 million years and erosion resulted in the original escarpment retracting inland. This erosion created the current coastal plain. The position of the present range is approximately 150 kilometres inland from the Gondwana split. The Drakensberg range is still eroding back at an average of 1.5 metres per 1000 years or 1.5 millimetres per year.

Walks and hikes. There are a number of beautiful trails in the area which mainly start from the Monks Cowl Camp which is managed by Ezemvelo KwaZulu-Natal Wildlife. Some of our personal favourites are Crystal Falls and the Spinx, Nandi Falls together with the Sterkspruit Falls, Gray’s Pass and the Blue Grotto.

Taking a helicopter flip over the Drakensberg. There are operators across the Road from Swallowfield at Dragon Peaks Resort.

Watching the sunrise over Champagne Castle, Cathkin Peak and Sterkhorn.

Ziplining at the operators near Drakensberg Sun.

Having a pub lunch or supper at the many resorts in the Valley.

A visit to the acclaimed Cathedral Peak Wine Estate.

The Winterton Museum is worth a visit;

You can do hot air ballooning near Cathedral Peak Wine Estate.

Thokoziza and a range of other craft centres in the vicinity are definitely worth visiting.

Battlefield sites such as Spionkop.

Totally enjoyed my stay at the cosy, well equipped rondavels. Tastefully furnished plus hosts were kind and responsive.

We had a wonderful time at Swallow fields, it was such a clear night, the stars were amazing and the braai area perfect for laying out in the open, staring out into the majestic sky. The Rondavels are just the cosiest, with all you need for a good rest. It's pretty close to every thing we wanted to do, and the dogs made it feel like home.

Superb. 5 out of 5
Sharon Viljoen

We enjoyed our stay at Swallowfield Rondawel, with an excellent recommendation from James about the Dragon's Peak pub & restaurant which is straight across the road.

Fabulous. 4 out of 5
Dewald Scholtz

Really nice place to stay. Very affordable, but quiet and private with lots and lots of facilities within 4km radius.

Start your review of Swallowfield Rondavels

People friendly and very safe to walk around.

Superb. 5 out of 5
Philisiwe Mazibuko

I enjoy the mountains and the views.

The friendly people and the quaint little shops. Scenery and much more.

Fabulous. 4 out of 5
Kirsten Graham

It was small and very pleasant, with so many sites to explore.

Fabulous. 4 out of 5
Andre Swanepoel

The proximity to Cathedral Peak and the heritage sites around the area.

Fabulous. 4 out of 5
Rinda Grimbeek

Lovely environment, beautiful nature, lot of things to do! Winterton Parkrun is a must.

Superb. 5 out of 5
DEE-ANNE DARCEY

The little town was awesome and plenty to do just outside of town.
We found different excursions every day.

Fabulous. 4 out of 5
+ Add your review of Winterton