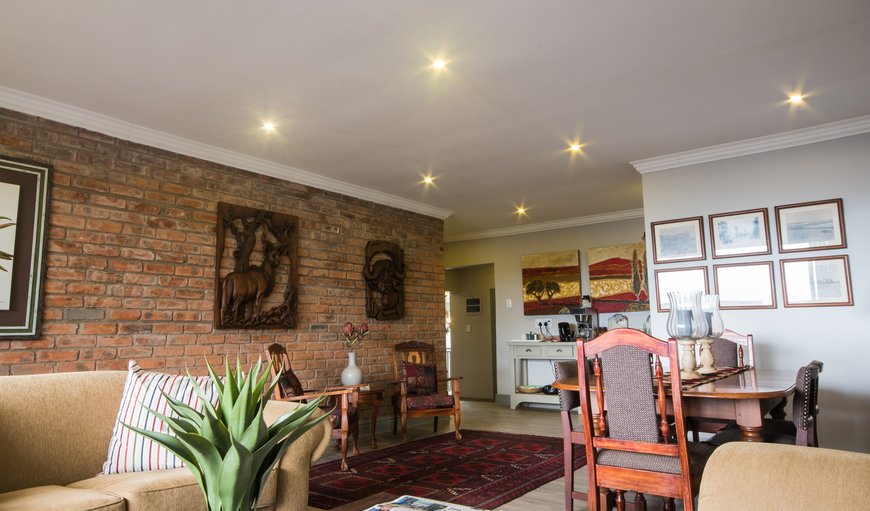 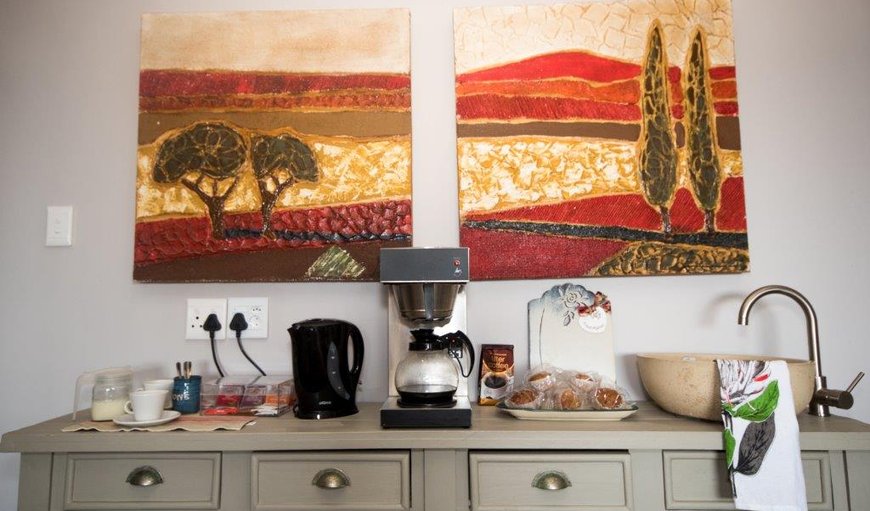 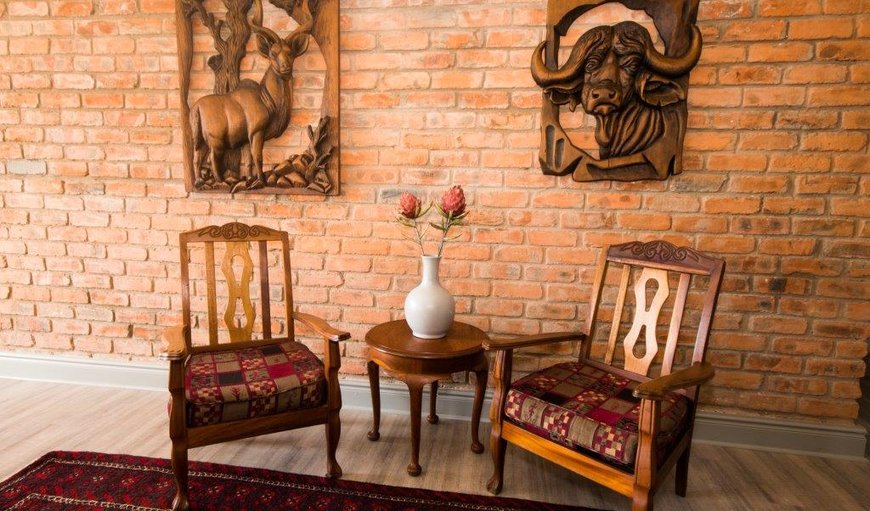 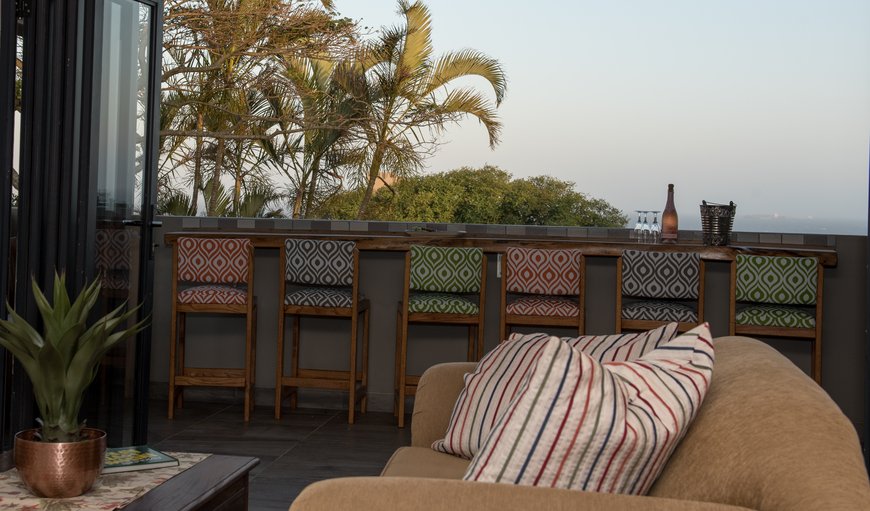 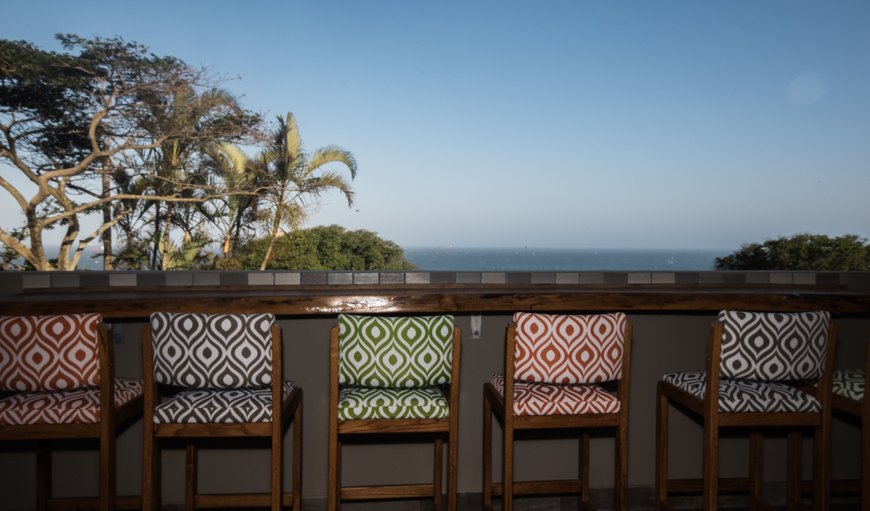 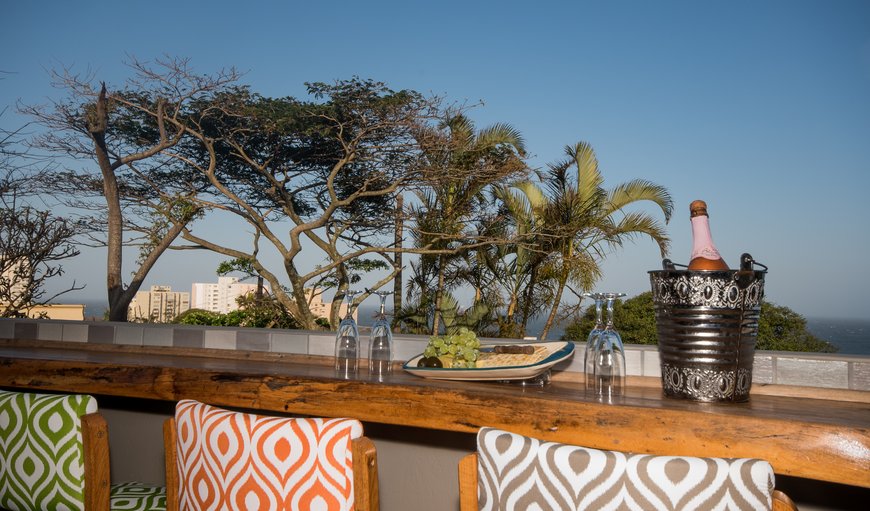 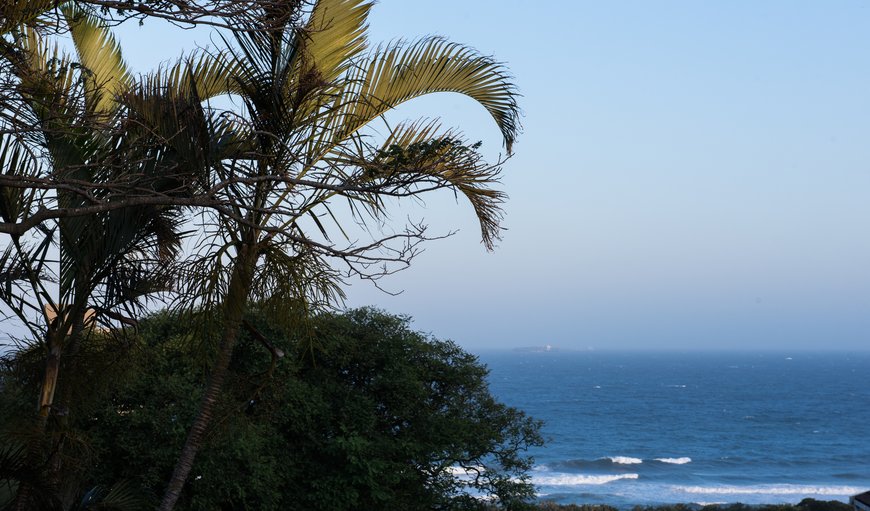 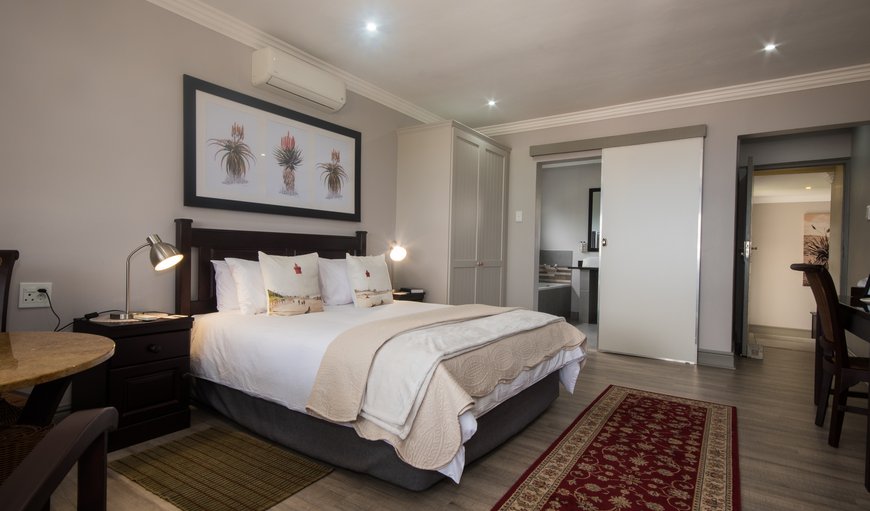 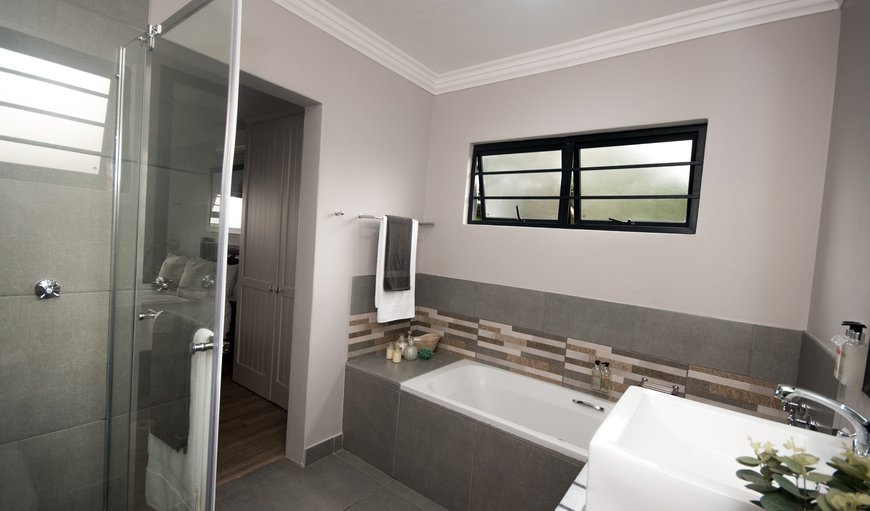 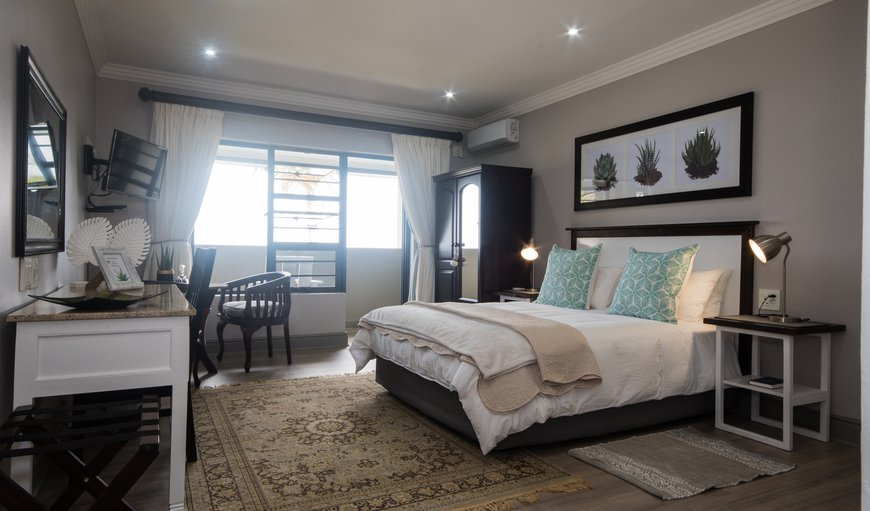 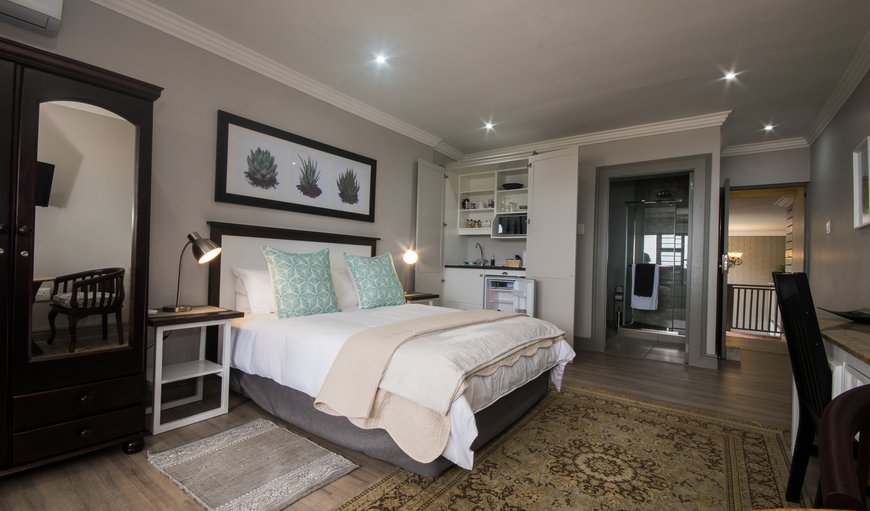 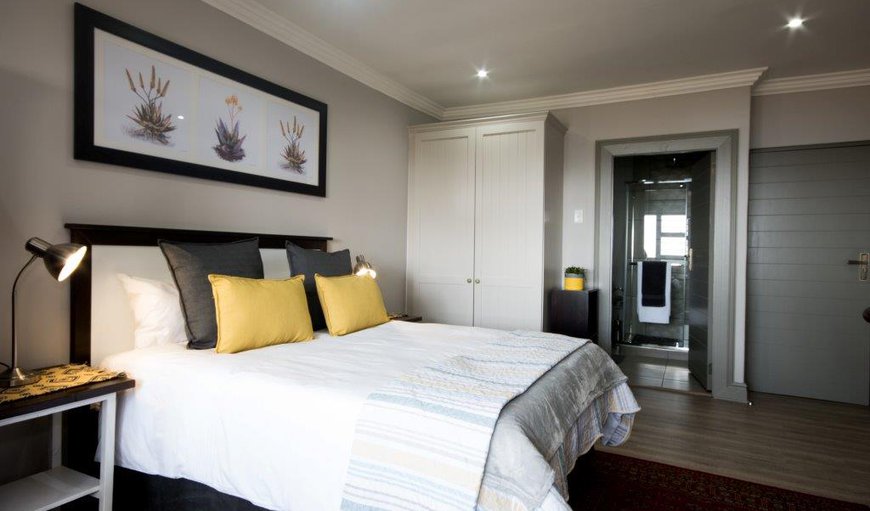 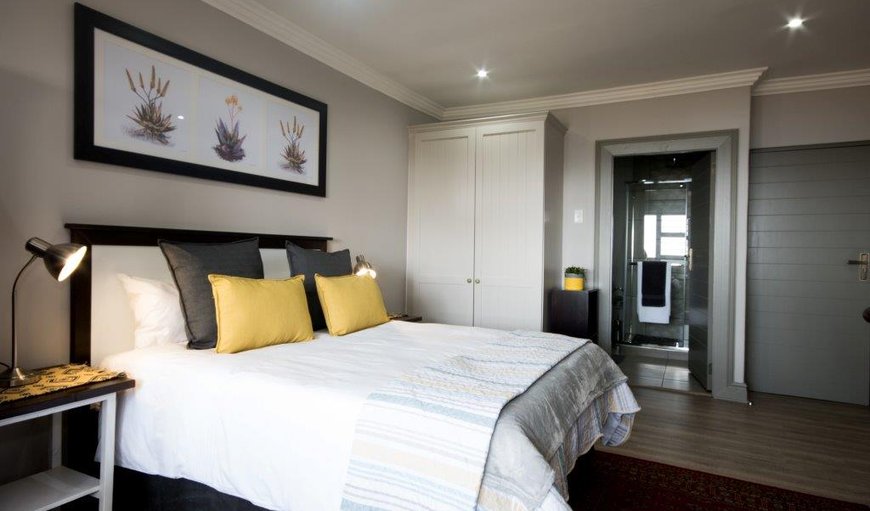 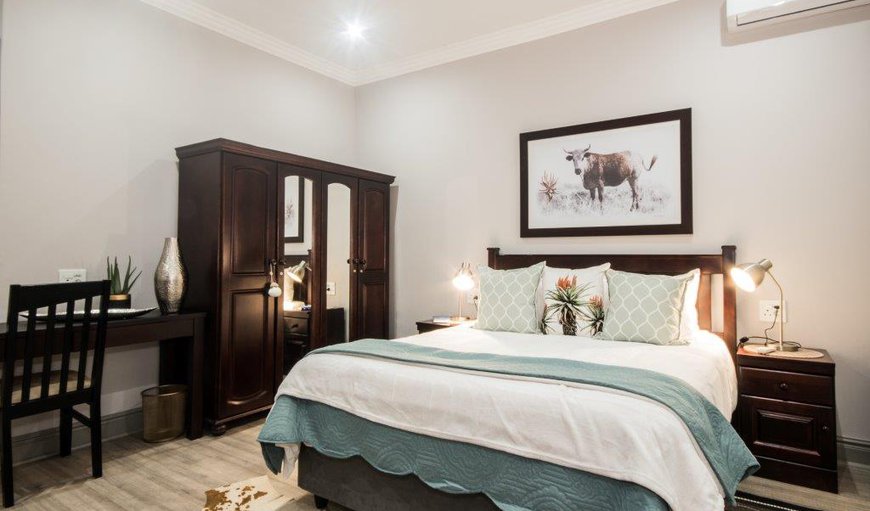 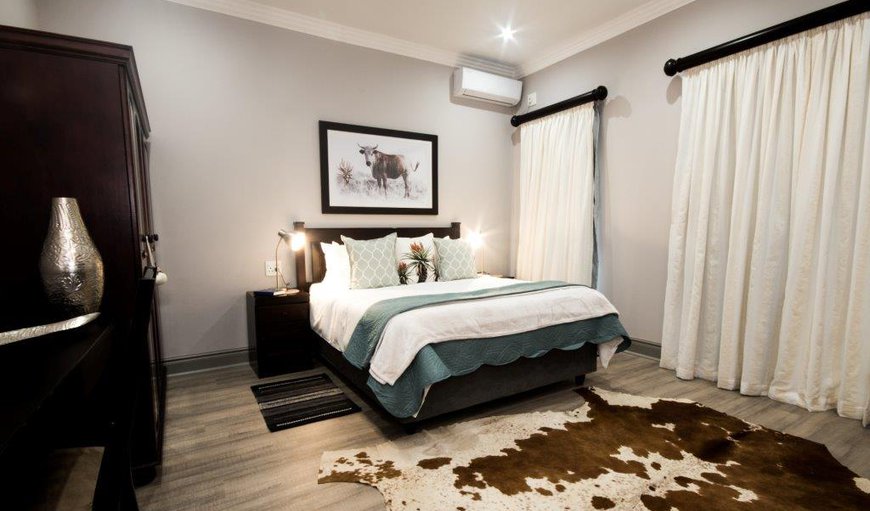 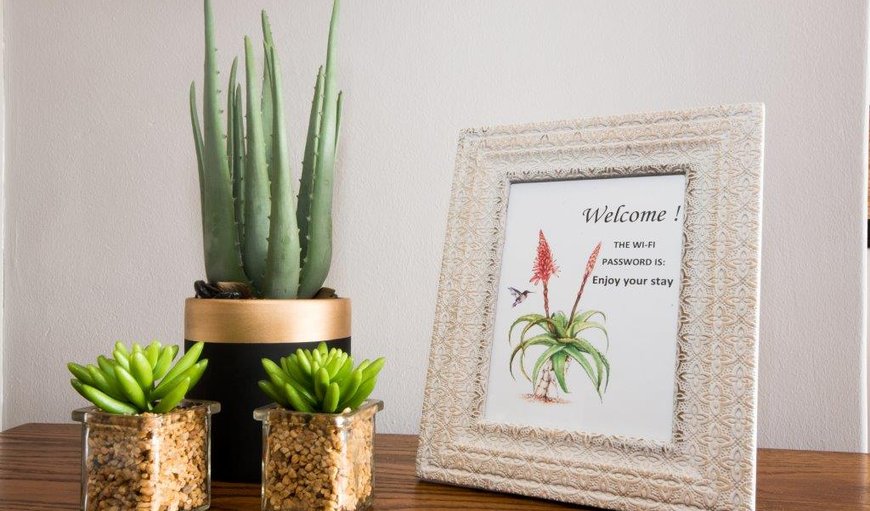 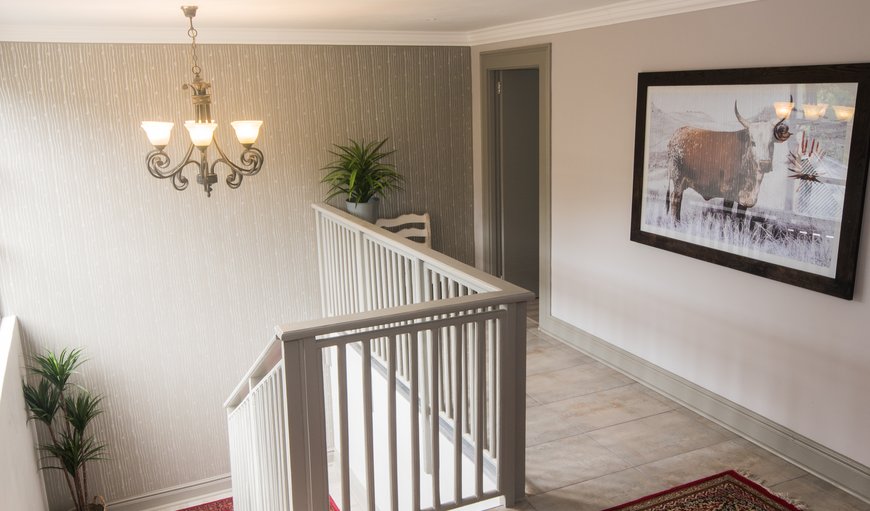 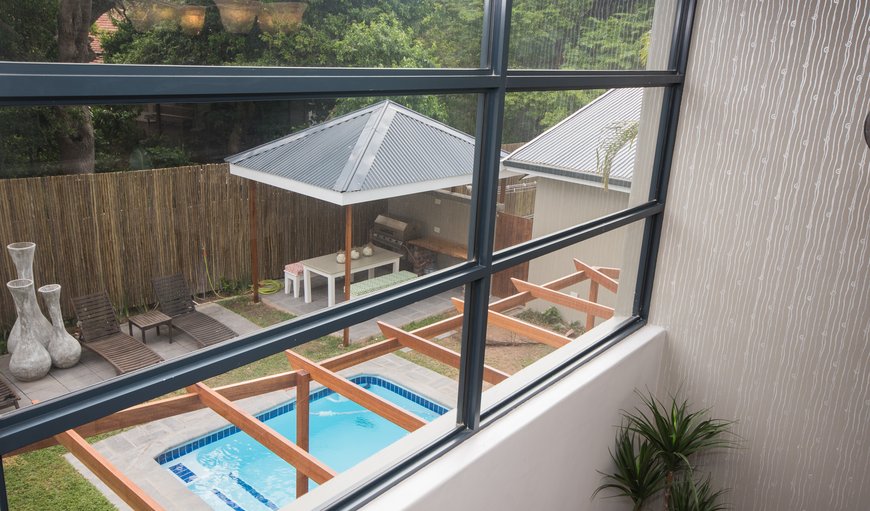 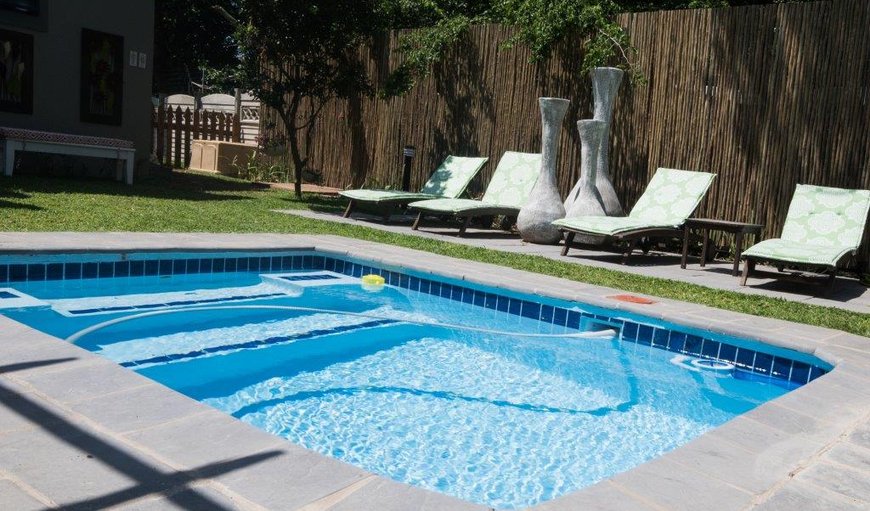 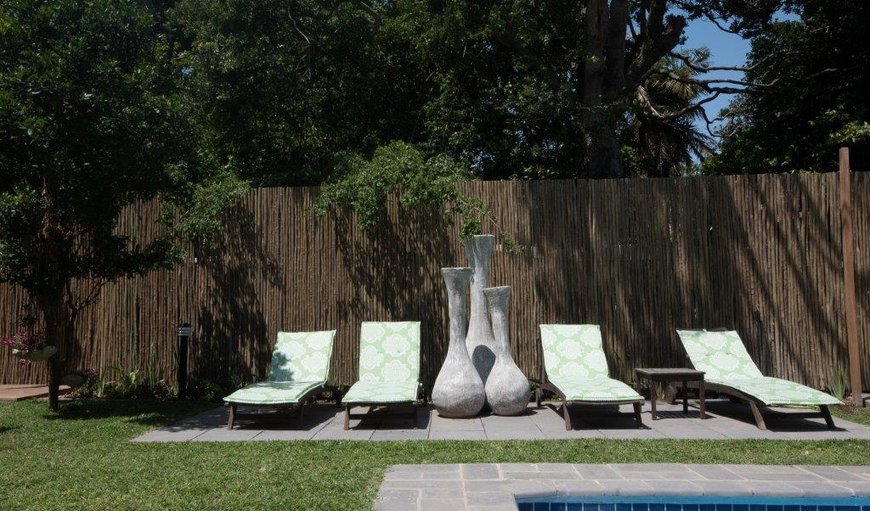 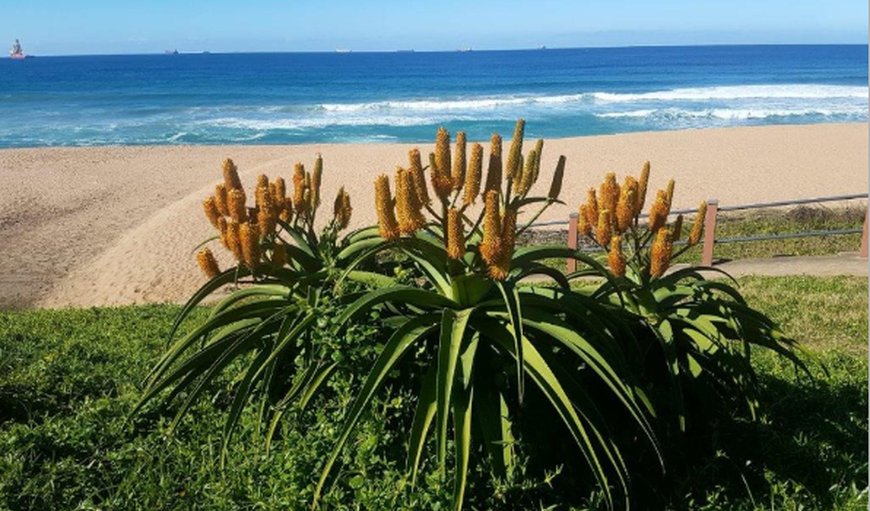 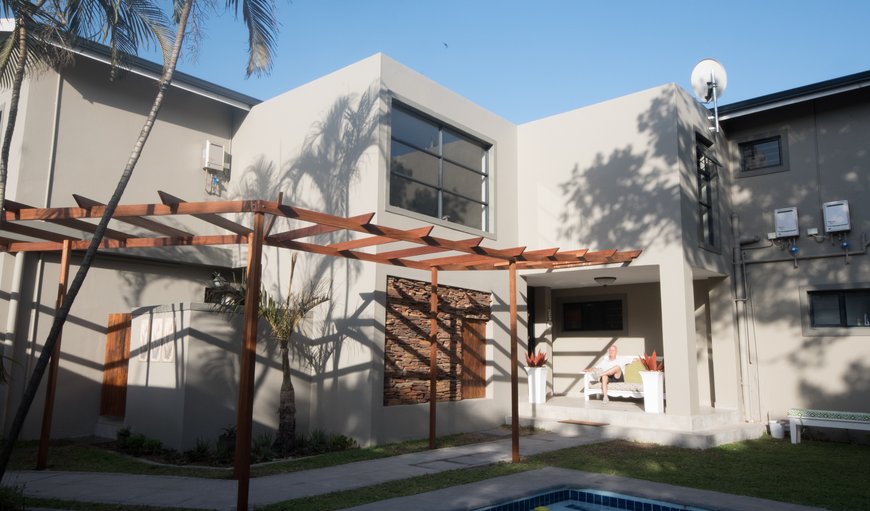 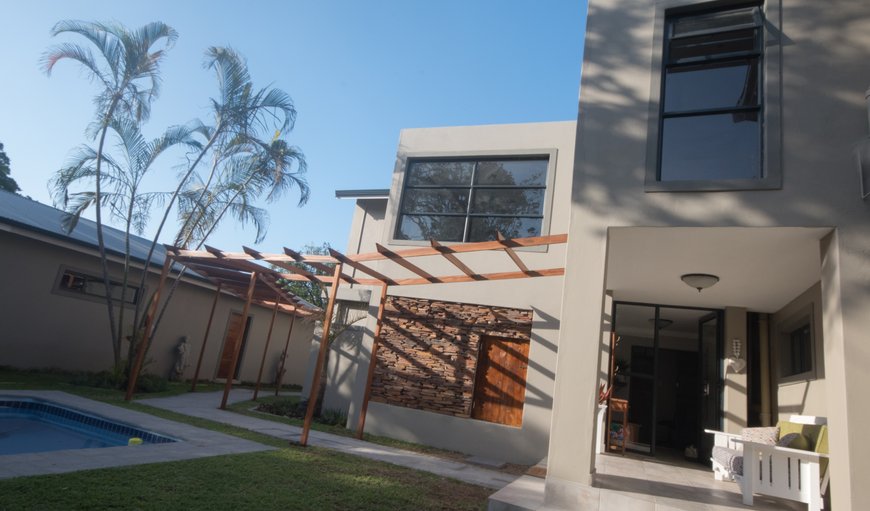 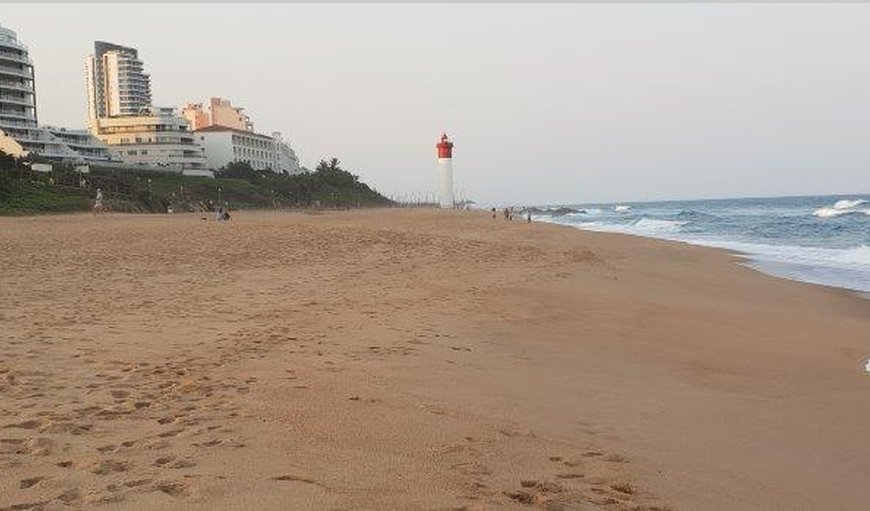 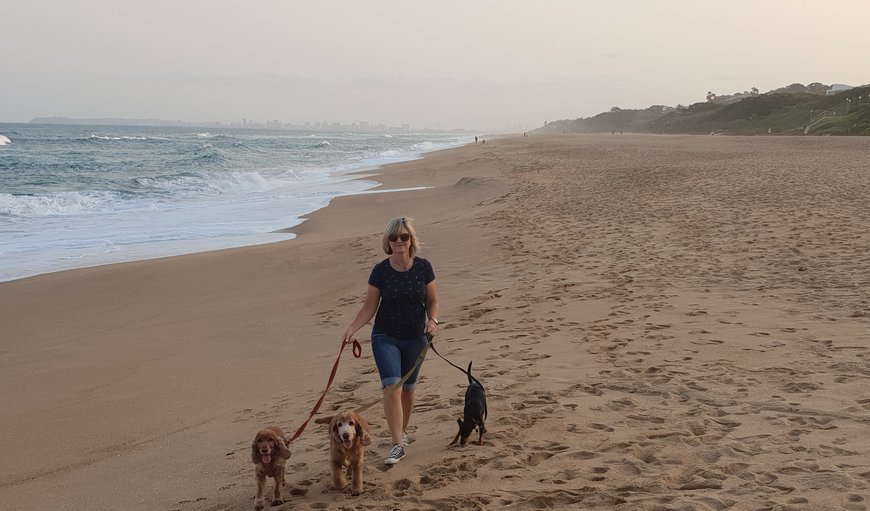 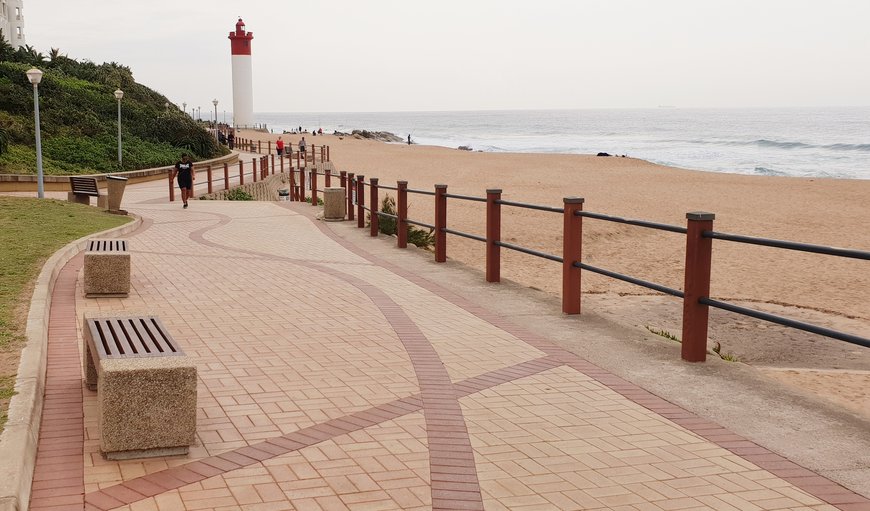 Hillside Guesthouse is a luxury guesthouse conveniently situated in the heart of the upmarket suburb of Umhlanga Rocks, minutes walking distance away from the beach (300 meters) and the vibrant Umhlanga Village (700 meters) but far enough away to have the benefit of peace and quiet after a long day at the beach or in the office.

We offer a choice of five luxury suites (just over 30 square meters), each homely and tastefully decorated with quality percale bedding to ensure the comfort and enjoyment of our guests. Our accommodations all have private entrances with private patios, air-conditioners, en suite bathrooms, with shower and bath, TV with personal DSTV decoders, under counter fridge, microwave, toaster, tea and coffee making facilities, continental breakfast in your room (no hot breakfast available), personal safe and hairdryer. Each suite is also fitted with an International Electrical Socket, free high speed WiFi and safe off road parking. Laundry services and beach towels are available on request.

Umhlanga is an affluent residential, commercial and resort town north of Durban on the coast of KwaZulu-Natal, South Africa. It is part of the eThekwini Metropolitan Municipality, created in 2000, which includes the greater Durban area. It is bordered by Durban North to the south and Mt Edgecombe to the west.
It is well known for the Gateway Theatre of Shopping which is the largest shopping mall in the southern hemisphere. It also has the second tallest skyscraper in South Africa named Pearl Sky which will stand 183 meters apon completion in early 2018. There are two beaches - Bronze Beach and Main Beach both of which are patrolled by life guards throughout the day. Umhlanga is one of the fastest growing cities in South Africa - the population increased 57.5% from 15,387 in the 2001 census to 24,238 in the 2011 census. Recent estimates place the population at over 30,000.
In the same way that Sandton, Gauteng is becoming the financial centre of Johannesburg, Umhlanga is becoming the main economic hub of Durban.

Hillside Guesthouse is only a 30 minute drive from the Durban International Airport and 15 minutes from Durban. Our accommodation is within easy driving distance of The Durban ICC, multiple sports stadiums, golden beaches, Sun Coast and Sibaya Casino, Craft Markets, UShaka Marine World, Gyms, many Golf Courses, including Umhlanga Ridge and La Lucia business parks. Also nearby are Durban's best shopping destinations, the Gateway Theatre of Shopping and the exclusive La Lucia Mall.

Private entrances
* Private Patios
* Bedding is made up of 100% percale cotton
* En-suite bathrooms, with shower and bath
* Complimentary tea and coffee in all the rooms
* Television with DSTV in rooms
* Air conditioning in all rooms
* Ceiling fans in all rooms
* Hair dryer in each room
* Safety deposit box in every room to secure your valuables if required
* Microwave
* Toaster
* Dish-washing facilities
* International Electrical Socket
* A sparkling swimming pool is available for your use. Pool towels available.
* Honesty bar available for inexpensive beverages
* Wireless Internet Access
* Email and fax facilities available
* Wood and gas braai facilities available
* Under counter fridge
* A delicious Continental breakfast in your room
* Laundry services on request

Shopping malls including Gateway Theatre of Shopping, La Lucia Mall, Umhlanga Centre and many others.
Gateway Theatre of Shopping is the largest shopping centre in the Southern hemisphere, boasting a range of indoor and outdoor entertainment and activities, including wave pool, putt-putt, a selection of state-of-the art cinemas, and a
Virgin Active Gym.
Gateway Theatre of Shopping has cinemas and entertainment for all ages and is just a five minute drive away.
The Umhlanga nightlife has an abundance of the best restaurants, offering every type of cuisine, as well as some of the hottest night spots in the North Coast region.
The Umhlanga beaches and the Dolphin Coast are safe blue flag beaches with inviting golden sands are a five minutes’ walk away.
Scuba diving, Dolphin viewing and a visit to the Natal Sharks Board can be arranged.
There are many top Golf courses in the area including two Mount Edgecombe courses, Durban Country Club, and others up and down the famous KwaZulu Natal coast.
We are 15 Minutes from Durban City Centre, the Durban ICC, and Durban's beaches.
We have two casinos in the area being the Sibaya and Suncoast casinos for your gambling and entertainment pleasure.
Ushaka Marine World has the largest waterpark in the Southern hemisphere, along with restaurants and shops. No visit to Durban and the North Coast would be complete without experiencing it.
The ABSA (Kingspark) rugby stadium and the new landmark soccer stadium are both nearby.
The Sharks Board is the only institution of its kind in the world, offering guided tours, educational excursions, audio visual presentations, shark dissections and a large display of replica sharks are just some of the attractions.
The Umhlanga lighthouse was built in 1954 and is a landmark of the area that should not be missed, standing only metres above the beach.
The O'Connor Promenade is a wide, picturesque promenade with scenic views of the ocean with restaurants dotted here and there along the way.
The Dolphin Reef is found at Umdloti, just up the road from Umhlanga. This reef stretches for over two kilometres and is worth a visit for diving enthusiasts.
The King Shaka International Airport is just 15 minutes away.
The local Virginia Airport has a world recognised flight school and various other activities.
The new Umhlanga city centre borders on Gateway Country Lodge.
Umhlanga and the KwaZulu coastline has many more attractions which Ina and Eugene will be happy to inform you about.

I would really like to thank Hillside Guesthouse for taking care of my parents. I had made booking with them very professional.

Start your review of Hillside Guesthouse

Everything from walking to the sea to the shops, all round a super location in KZN!!

Superb. 5 out of 5
Esther Buyst

Everything is close to enjoy a weeks holiday!

Okay. 3 out of 5
Bokamoso Mwale

The view, the atmosphere, the restaurants and the people.

Superb. 5 out of 5
SIZWE MASHININI

Superb. 5 out of 5
Kubashnie Reddy

The view, the venue, the sea and the atmosphere, not forgetting the hospitality.

Superb. 5 out of 5
Rejoice Mpofu

The beach was very beautiful and the place was amazing.
The people are very hospitable as well and the food is to die for, I had a great time!!!

The beach (obviously).
Plenty of restaurants and activities .
Clean area.

Superb. 5 out of 5
Joanne Pretorius

A perfect place where you do not need a car, you can walk everywhere or take the little Tuk tuk taxis or uber. Loads of places to eat. Beautiful scenery and warm seas.

Superb. 5 out of 5
Simangaliso Vincent

Fabulous. 4 out of 5
Mbongeni Mabuza

Superb. 5 out of 5
+ Show more reviews + Add your review of Umhlanga Rocks